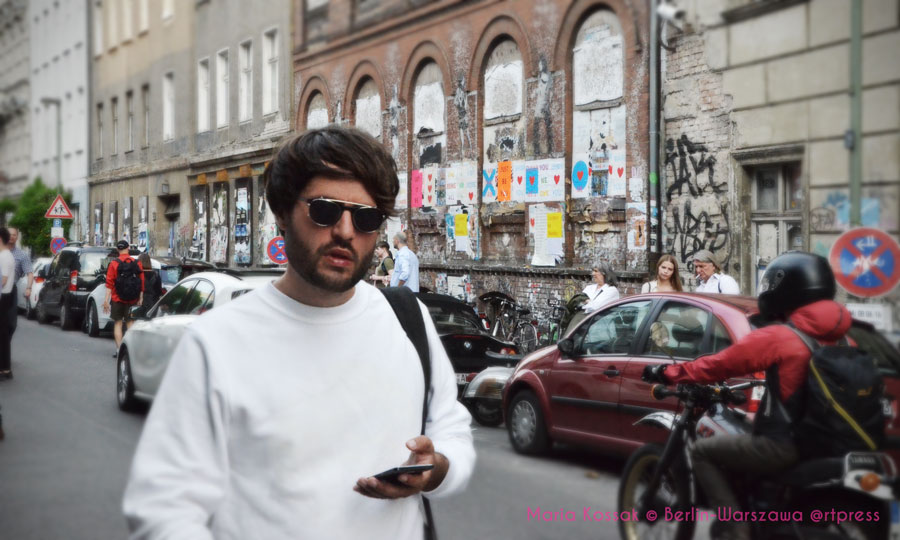 Having read Agnieszka Pindera’s text and having been around in Berlin, the city where I have been living since 2001, I can only agree with her classification of the curators’ species. I do think that the three categories of Polish curators she listed (Curatoris cognito, Curatoris commuter and Curatoris inventorem) also apply in Germany. Here, too, people have to commute to work (especially if you bear in mind that Berlin is still pretty impoverished and does not have enough to offer its creative inhabitants). Berlin residents have to diversify their operations to earn money as well (like Marie Graftieaux does by having an artist-run space, organizing curatorial festivals and working with artists). Of course, you will find extraordinary figures who blur the boundaries between an artist and a curator or re-write definitions of the art of exhibition making (a category in which I would like to see myself). I even think that, somehow, the three categories Agnieszka describes are valid around the Western world and that it is probably why she chose Latin terms to define them: they thus become more universal and academic, as if you could pin those types of curators in display boxes, like other curators do with lepidoptera, scorpiones, phasmatodea and coleoptera at Natural History Museums.

At this point, I would like to add a new category, a way of defining a line, of designing sub-species in the classification defined by Agnieszka Pindera. Several years ago, French art critic Catherine Millet wrote of her exasperation at a dinner party during which the first question that the artists were repeatedly asked was: « T’es chez qui ? » [Who are you with?]. The artists had three possible answers which defined the conversation: a famous gallery (meaning they are cool and worth talking to), a no-name gallery (meaning, well, poor you…) and the ‘I-am-a–no-gallery-artist’ (meaning basically: « Leave this table now, you fucking loser! »). Instead of caring about topics, practice, media, personal history or aesthetics, critics and collectors make their judgements based merely on the affiliation. (It is somehow the same for writers and their publishers or musicians and their record label). But hey, are we sure that this is a right way to judge if a person is worth talking to?

It is actually the same with curators. When I say that I am a curator, I am often asked « What’s your institution ? » and as soon as I reply that I am a freelancer, people lose interest and move as fast as possible on to another person, to a more exciting and business-efficient conversation. The only trick to catch their attention and make them change their mind seems to be: « You know, I’ve worked with Chris Marker, Olaf Nicolai, Ali Kazma and Suzanne Treister…  ». In our world of facebook-false-friends and social-media-wannabees, name-dropping is, of course, the best way of drawing attention. So, here is my word of advice to young curators: work with Olafur Eliasson, Ai Weiwei or Taryn Simon (even if, like me, you consider their art as a fraud) and make a name for yourself!

My friend and colleague Inke Arns directs an institution in Dortmund called Hartware MedienKunstverein. She has a large space, an amazing team of people capable of producing artworks and exhibitions, and a program that defies the rules of an art market. (Alas, she also has to spend a huge amount of time raising money from public sponsors to finance her institution and its exhibitions). Being based in in Berlin, she belongs to the category which Pindera dubs Curatoris commuter, crossing Germany several times a week. She also possesses a business card with a logo that was designed in 2005 by German photographer Heidi Specker. We have been co-curating several projects and regularly travel together to research art in the post-Soviet bloc for the Goethe-Institut. Each time we introduce ourselves to artists or colleagues, she gets more attention than me. Not that she has a bigger mouth or speaks louder (???), no, she just has a business card which reads: « Artistic Director ». Ironically, she once made me a Christmas gift of a business card holder to pressure me into producing some. Clearly, my rebellious nature made me even more reluctant to get a business card after that! At the same time, I am sure her business card is nothing compared to one which says: « Centre Georges Pompidou » or « Tate Modern ». In this world we live in, it is like with credit cards : you can have bronze, silver, gold or platinum, and facial expression of your interlocutor very much depends on those colours !.

Berlin is full of artists and curators. Peter Lang (who died in 2013) was one of the greatest people the city has ever had, but because he was never affiliated to an institution his legacy remains within a close circle of friends and connoisseurs. He freelanced throughout his entire life, and curated exhibitions following his personal interests and friendships with artists. His freelance position made it possible for him to deal with : the history of comic books in the GDR, heritage of Jules Verne in contemporary art, abstract motifs used to decorate buildings, Karl Hans Janke (an amazing and still largely unknown artist), mathematics and sciences. Each of his exhibitions was defined by the location in which it was organized and by a group of artists he followed and was faithful to. He reached out to areas which defied existing trends and fashions.

Last year, I had an opportunity to curate for ‘Eigen+Art Lab’ in Berlin. Suddenly, my status changed. By curating in the experimental space of one of the most famous galleries in Germany, I gained about ten points in credibility, my chances to win the Eurovision of curators soared all of a sudden. Nowadays, people I do not know approach me at openings in order to introduce themselves. Obviously, as soon as I ask them if they visited my website, read any of my texts or seen any of the exhibitions I curated, their answer is « no, but I heard you worked for ‘Eigen+Art Lab’… ».

I would therefore like to make an appeal : wherever you are, Warsaw or Berlin (or anywhere else for that matter), please do change the way you approach artists, curators and critics. Before asking them WHERE they work, ask them WHAT their work is about. You might have a better start at a conversation (if you wish to hold one) and perhaps even learn a thing or two about the person or about a field you have never been involved in (that is, if you wish to learn something new). It is all about curiosity and opportunity to make real friends.

French architect, curator and critic. he lives and works in berlin since 2001.

Thibaut de Ruyter is (or was) a regular contributor to the magazines l’architecture d’aujourd’hui, artpress, il giornale dell’architettura, particules, fucking good art, frieze d/e, published texts in catalogues and directed two special issues of artpress, one about berlin and another on art & prostitution.