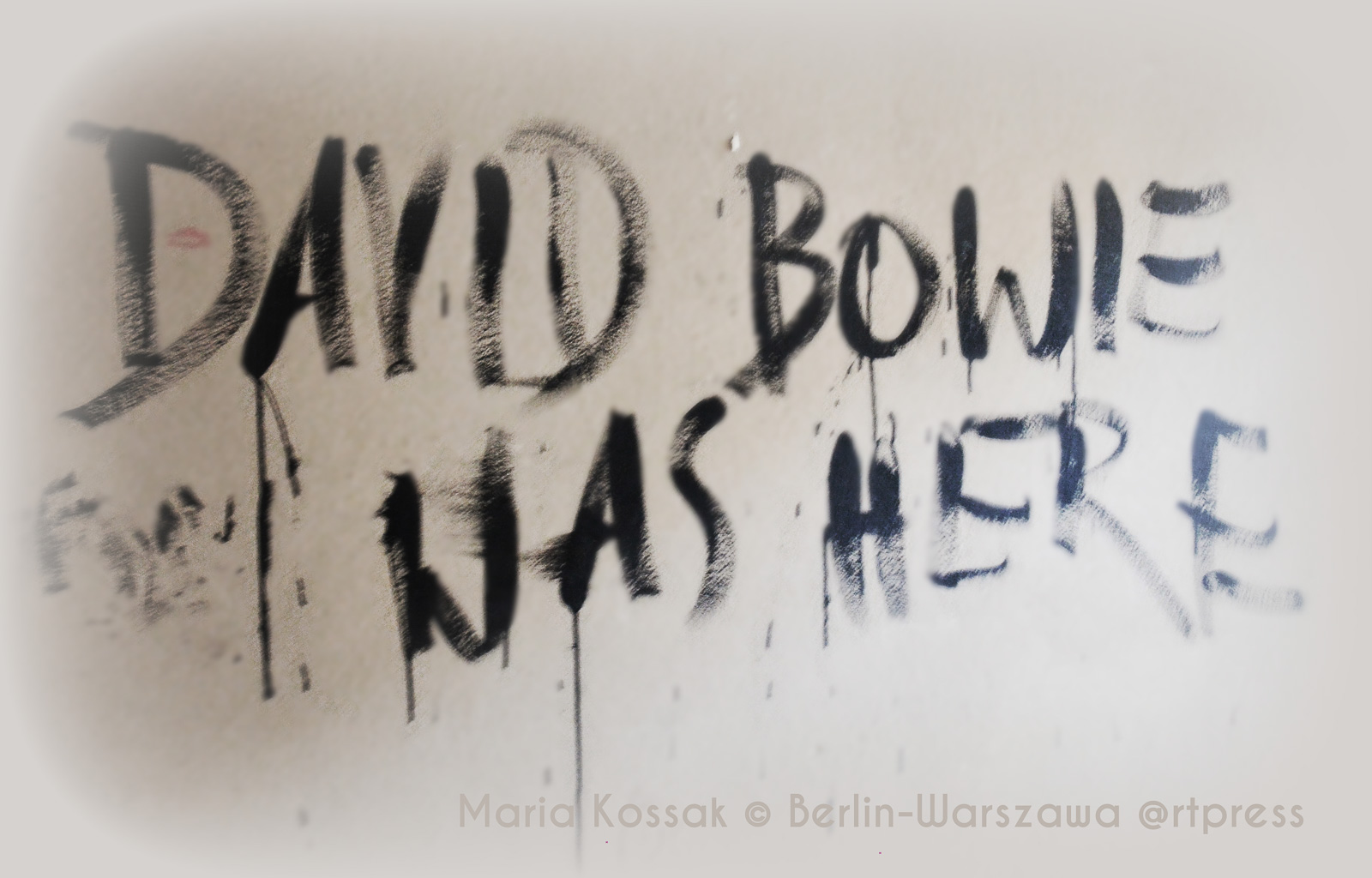 Hauptstrasse, a street in the western quarter of Tempelhof-Schöneberg, Berlin; house at number 155. The tenement building of the Altbau type is over a century old. It was erected in the Wilhelmine era in Art Nouveau style, its elevations finished in cream-coloured plaster, the entrance adorned with arcaded arch and metal door. The four storeys are topped with an attic; five levels, the ground floor occupied by shops and service units. Mosaic tiles adorn the entrance hall, spiral stairs are covered with a red carpet. A section of the former working-class quarter to the east of a four-lane artery and a block of houses, survivors of the two world wars, squeezed in between the railway lines. The area was depicted by Christopher Isherwood in his book Goodbye to Berlin which inspired David Bowie. The writer himself resided nearby, on Nollerdorfplatz which today serves as a boundary of this part of the district, very popular amongst the more affluent gay community. This is a place where the neighbours know one another and where the opposition against the Third Reich was once ripe. Marlene Dietrich was born in this neighbourhood; cabaret chanteuse Hildegard Knef, Marlene’s successor, used to perform in local night spots. In January 2016, in the aftermath of David Bowie’s death, everybody suddenly remembered this address and thousands of Berliners signed a petition to change the street name to David-Bowie-Strasse. The pavement in front of the building was covered with letters, candles and flowers. Sometime later, a memorial plaque was fixed to the wall.

155 Hauptstrasse – neither overly elegant, nor fashionable; an ideal place to escape from one’s own self and paranoias, just like David Bowie and Iggy Pop (who both moved here 40 years ago) did. Bowie lived on the second floor, Pop on the third. Berlin at the time proved to be a perfect destination for a great escape for both of them. The fruit of this escape turned out to be the most prolific period of their lives.

Bowie was fleeing sunny California which for him, paradoxically, turned into a hell on earth. Heavily addicted to drugs, he was becoming increasingly paranoic and fascinated with black magic and occultism. The musician was drawn to Berlin by his own artistic fascinations: German Expressionists, the Weimar Republic and Merlene Dietrich.

Berlin was the place that accepted Bowie with no questions asked, just as it used to before and as it would continue to accept all the eccentrics seeking happiness there – without exaltation, dispassionately, casually. When in Los Angeles, Bowie – overcome by attacks of paranoia and fear of people – would not go out of the house for days. Here, nobody paid attention to him. „Berlin was and still is an ideal place to escape to – here nobody looks up from their pagers and laptops”, wrote Marc Spitz, author of Bowie’s biography, in 2009 (today, pager has been replaced by smartphone). „Every Berliner is so lost in his own world in which he is the star of a monodrama – a mix of Spalding Grey and the Synecdoche New York performance – that it is easy to understand why in 1977 this very city exerted such an impact on a superstar of the Bowie’s sort. It is a private metropolis of which every resident is living in an expressionistic movie and, while remaining in the movie, he does not go out, just like that, for a night out – he simply leaves.”

„I share Gunther Grass’ opinion that Berlin is a true epicentre of everything that is happening and will be happening in Europe within the coming years”, said Bowie in an interview he gave to Vogue in 1978. West Berlin where he ended up was indeed an island in the middle of GDR, encircled by the Wall; a unique area controlled by the Allies, an island with the status akin to that of a free city, attracting young people who evaded military service – its territory was exempt from the common military duty. The building which housed Hansa Studios – where Bowie recorded three albums dubbed by the fans and critics as the „Berlin trilogy” and where Iggy Pop’s famous Passenger was recorded – was adjacent to the Berlin Wall. Looking out of the window, one could see armed soldiers on a watchtower. Legend has it that the song entitled Heroes, which was recorded at the time, was inspired by an image spotted by Bowie during his recording work at the studio: a couple smooching in the shadow of the Wall. There is a grain of truth in every legend; the true inspiration was a love affair between Tony Visconti, the album’s producer, and one of the artists who provided vocals on the album. Bowie was trying to be discreet in order not to jeopardize his collaborator’s marriage. His own marriage to Angie, who lived in Switzerland at the time, was falling apart (the couple divorced in 1980). Their son, Zowie (today known as Duncan), spent some time at 155 Hauptstrasse; he was, however, fully protected from his father’s party lifestyle.

If anyone were to venture a reconstruction of Bowie’s daily rituals at that period, it would go more or less like this: when he is not working at the studio, he is wandering around the town. Casually dressed in proletarian style: a tweed hat, jeans, ordinary shoes; sometimes he would wear a long leather coat. He purchased a Raleigh bike – a classic, renown British brand. Having drunk his morning coffee and having smoked his first Gitane at ‘Anderes Ufer’ located in one of the neighbouring tenement buildings (today it is ‘Neues Ufer’ – the former name referred to the fact that it was the first officially gay-friendly bar in the post-war Berlin split in half by the Wall), he bikes down Hauptstrasse towards the Hansa Studios, passing by Kleistpark underground station beyond which the street changes its name into Potsdamer Strasse. When it rains, he gets on a bus. He often visits Bucherhalle, an antique bookstore to the left of his house on Hauptstrasse. He can spend hours in there. Together with Iggy, they often pop in to other spots, such as ‘Dschungel, The Unlimited’ on Kurfursterdamm or ‘Cafe Exil’ in Kreuzberg where they spend long evenings debating over pints of beer. At the latter venue, there was a back room with a pool table, filled with cigarette smoke, which served them as their makeshift salon where they entertained their numerous guests. They have both escaped to Berlin to start a new life, and yet they do not keep off drugs. One night, they borrow a car from their dealer. Bowie is driving, Iggy in the passenger seat. He accelerates and spends the next several minutes speeding madly around the hotel underground car park, unable to find the exit and shouting that he is about to top himself by driving straight into a wall. Luckily, he runs out of petrol before he manages to do that, and both men, hysterical, flee the scene leaving the car behind.

The walls of Bowie’s Hauptstrasse apartment resemble an art gallery – painted white, they are dotted with the musician’s paintings, inspired by the Expressionist art. It is also a time of reading Nietsche and frequent visits to the Brucke Museum in order to admire the works of Kircher, Kollowitz and Heckel.

The Berlin era in Bowie’s life is inextricably linked to the Warsaw episode. The musician – who experienced extreme fear of flying, so much so that he travelled to Japan by rail – passed through Warsaw twice: in 1973 and on 21 April 1976 when, together with Iggy, he set off on a European tour. The tour took him from Bern in Switzerland, through Helsinki, to Moscow – with a planned stopped in Zurich, and an unplanned one in Warsaw.

Paul Trynka, author of yet another of Bowie’s biographies, recounts the events as follows: „On 21 April, a small party was thrown to celebrate Iggy’s 29th birthday. David gave him a present – a Polaroid, so that he could document their 3-day long trip. When […] they reached Poland, the train started crawling through a most bleak landscape. The team of five (aside from Bowie and Pop, there were also: Corinne Schwab, Bowie’s manager, Pat Gibbons and Andy Kent, a photographer) stared for hours at buildings riddled with machine guns or at gloomy remnants of towns, still marked by bombs. The train stopped at every station, so they got off to buy beer or soup and peas – the only food available to order. While in Warsaw, riding amongst the freight car railway, they spotted workmen, dressed in grey, laboriously unloading the coal. Sleet was falling against the train windows. David perpetuated this unforgettable, sombre sight in the unique instrumental piece titled Warszawa.

A short stroll that the musician took in Żoliborz took place more likely on the second visit, while the train had a 40-minute long technical stopover at Dworzec Gdański. Bowie supposedly reached a bookstore at today’s Wilsona Square (Komuny Paryskiej Square at the time) where he purchased an album of the Śląsk Song and Dance Ensemble. The album included Helokanie, a piece composed by the Ensemble leader, Stanisław Hadyna. The folksy stylized vocals used in Warszawa, recorded one year later, come from this very piece. Son of producer David Visconti was a direct inspiration for the piece. Brian Eno, who worked with Bowie on his album Low, heard the boy playing repeatedly three notes on the piano (A-B-C). He sat at the piano next to the boy and played some more notes, thus composing the beginning of Warszawa.

There is no David Bowie Street in Żoliborz, but on 21 April 2016 a mural was unveiled on the front elevation of a building at 1 Marii Kazimiery Street. The mural, initiated by the Stacja Muranów Association, is dedicated to the musician and commemorates his trip via Warsaw 40 years earlier. Mural’s author, architect Dawid Celek, is not only Bowie’s namesake but these days he resides in Berlin where the piece Warszawa from the album Low – the first in the so-called “Berlin trilogy” – was recorded by Bowie at the Hansa Studios, amongst the ruins reminiscent of post-war Brixton, right next to the Wall. 21 April is also the birthday of Iggy Pop, the famous passenger who travelled with Bowie via Warsaw. Thus, all the pieces fall into place, creating an accidental yet significant whole.